I like SciShow quite a bit, and it's about time they talked about some cool fungal biology.
Posted by The Alabamycologist at 12:01 PM No comments:

For those unfamiliar with how calendars function, I haven't posted in over a year.   When I logged in I found there were 424 spam messages awaiting my moderation.

I wasn't sure what could spur me to post again until yesterday when I looked at a Google News alert in my inbox with dismay.  Not surprise, but still with dismay.

White Nose Fungus (Geomyces destructans) has been found in Alabama.  It represents a significant threat to the Federally-listed endangered grey bat.

Sad news for naturalists across the state.

Posted by The Alabamycologist at 12:04 PM No comments:

I'm not sure why I didn't come across this sooner, but today is the day I learned about IUCN's list of the 100 Worst Invasive Species.  Not surprisingly, there are some fungi (and two fungus-like protistans) on there, though not as many as I might have thought.  They list five species, of which I would have guessed that four of them.  Reflecting their bias towards macroorganisms,  there are NO bacteria on the list, but two viruses (which are not even alive, in my well-supported opinion) and one non-funguslike protist (the avian malaria pathogen, Plasmodium relictum, an apicomplexan).  Also, the invasives are bad because they are disease agents of larger, more charismatic eukaryotes.  They do indicate that the criteria for selection includes "serious impact on biodiversity and/or human activities".

The last of these, I had never heard of before.  I'd heard of the genus before, but I'd forgotten that it's an oomycete genus. The IUCN describes these as "macrofungi", though I would say none of them really are, except the pycnidia and perithecial stromata of C. parasitica are visible to the naked eye.
Posted by The Alabamycologist at 12:03 PM No comments:

At long last, the news I've been waiting for!  The mysterious Alaskan orange goo, thought at first to have been eggs of something, or possibly the dinonflagellate Noctiluca, later discovered to be rust spores, has been positively identified. The mystery rust is Chrysomyxa ledicola, which causes spruce-labrador tea needle rust.  The spores identified were the urediniospores, which is known as the repeating stage of macrocyclic rusts.  It is common for rusts to produce ba-jillions of spores, especially urediniospores, to keep reinfecting their alternate hosts.  In this case, that alternate host is labrador tea Ledum spp., though the NCCOS webpage lists it as Rhododendron tomentosum.   That name isn't accepted by PLANTS.usda.gov, which is my source for this kind of information.  That fact helps explain how the source of the orange goo was originally so mysterious.  While the primary host, spruces (Picea spp.), are a group that would be difficult to hide that many spores on without someone taking notice, labrador tea is a common understory plant that wouldn't raise as many alarm flags.
Posted by The Alabamycologist at 8:28 PM No comments:

After enjoying Mushroom so much, I thought I'd check out another one of Dr. Nicholas Money's offerings, Carpet Monsters and Killer Spores: a Natural History of Toxic Mold (2004, Oxford Univ. Press). This book focuses on the mold Stachybotrys, which has been correlated with some severe health problems.  I wonder if just including the name of this genus will increase my spam-commenting?

He focuses on Stachybotrys and discusses the strange intersection of the fungus and humanity. Physicians and lawyers delve into mycology.  This part, I must confess, held little pleasure for me.  I was hoping for more of the insightful pop-mycology (if such a thing exists) that I read about in Mushroom.  I was hoping for more about the common molds that surround us in our daily lives, and I enjoyed the last chapter best of all (about dry rot fungi, Serpula and Meruliporia), not only because of the more interesting (to me) biology of these fungi, but also because of the smirk-inducing humor.

I've gotten to see a fair amount of buzz around Mushroom, as Dr. Money presses the flesh in support of it.  Some of my Facebook friends posted about the interview, which resonated mostly around the finding of a sporocarp of Schizophyllum commune in the back of a patient's throat.  Yes, that is disgusting, but unlikely to happen to those in decent health and good hygiene.

In summary, I don't have much to say about Carpet Monsters.  I would hazard most of the audience for this book is comprised of people with a vested interest in sick-buildings and Stachybotrys (Here I expect a bump in spam commenting) rather than a fellow mycologist like myself.  And for those who pick it up with that purpose, you will find the book to be well-researched, and not overly technical (though a basic understanding of biology is always helpful).  If you are interested in getting your beak wet with fungi in general,  I would start with Mushroom.  Though again, I haven't read Mr. Bloomfield's Orchard or Triumph of the Fungi yet.  One of those will probably be next.
Posted by The Alabamycologist at 10:59 AM No comments:


As a person who spends a lot of time outdoors, I think it necessary to put in a good word for the Forever Wild Program here in Alabama. From what I've been told, the program acquires land using monies collected from state oil and gas leases (not taxes), which are then managed by the state for the use of all Alabamians, including hunters and fisherman as well as birdwatchers, tree huggers, and fungal foragers like myself.
Posted by The Alabamycologist at 11:44 PM No comments:

Santa was kind, and read my Amazon wish list, and brought me a shiny new copy of Nicholas Money's new book Mushroom.   Now, I have a shelf full of books about mushrooms, and another shelf or two about other fungi that don't produce mushrooms, so I wasn't sure what to do once I had the thing in my hand.   A couple of points in the interest of full disclosure: 1. I haven't read all of my mycology books thoroughly, there just aren't enough hours in the day and there is lots of redundant information, so I don't feel like a bad person (or Persoon?) for this. And 2., I haven't read Mr. Bloomfield's Orchard, also by Dr. Money, nor either of his other books, though I feel as though I should now, since I enjoyed Mushroom so thoroughly.

Yes, having the book in my hand, and having some time between semesters, I did what a scholar should do when not teaching or out in the field (looking for fungi) or in the lab; I read the book.  And what a joy it was!  In spite of my beef with other reviews of the book which had nothing at all to do with the book itself,  I found it to be a good read on many levels (namely three).

It's educational. Even to a trained mycologist such as myself, I found much that I did not previously know within its pages.  He incorporates modern research as well as historical details about mushrooms and their academic acolytes.  That said, the writing, I think, isn't restricted to an audience of mycologists, but is accessible to a lay audience (though perhaps one that at least passed a course in biology).  As evidence of this, a friend who is an academic though not a scientist picked up the pick and started reading delightedly.

It's funny.  And no, he doesn't resort to cheap laughs so much as humorous imagery to illustrate points (such as Angelina Jolie flying through the air into a... not going to spoil the ending).    The hackneyed "fun-guy" reference is avoided, mercifully.  Most mycologists I've met have had a healthy sense of humor, and Dr. Money is no exception.

His views on the public perception of mycology succinctly defined and girded my own.  Mushrooms and other fungi have generally had two strikes against them in the eyes of the laity.  1.  They are bad, agents of sickness, decay and disease, and 2. Mushrooms are strange and magical, a window to the supernatural realm.
As to the first point. There is a common perception that mushrooms will kill you dead as soon as look at you.  True enough SOME mushrooms contain toxins that will either kill you or make you wish they had killed you, but the generalization of mushrooms being bad and poisonous has been exaggerated.  If you went out in the woods collecting mushrooms, and tried to eat all of them, it would be an act as indiscrete as saying you wanted to go hunting mammals in the woods with your bare hands.  Maybe you'd find a squirrel, but maybe you'd find a porcupine, or a mountain lion.  The potential results are the same.  Maybe you find a meal, but maybe the quarry would hurt or kill you instead.

As to the second point. (2. Mushrooms are strange and magical, a window to the supernatural realm)
Mushrooms and the fungi that produce them do have value ecologically, as well as having potential application to problems of humanity (both in the sense of those problems we cause and the problems we face in our quest for survival). However we should approach these solutions with a scientific mind, not by suggesting the fungi have a source of magic that we can tap if we all just wish hard enough.

For both of these points, the real problem is ignorance, and the real solution is a scientific approach.

In summary, if you have an interest in mushrooms (which well you might if you are reading this), then you will likely enjoy this book.  It won't tell you how to identify mushrooms (here you will need to fill your own bookshelf with other works), but it will hopefully explain why you should try.
Posted by The Alabamycologist at 3:45 PM No comments: 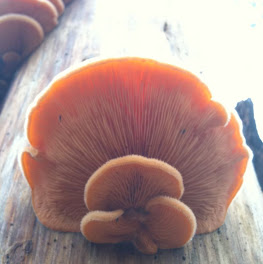 Fun websites for Fun Guys and Fun Gals, or all of Fung-Us

Well done! You know quite a lot of biology. Maybe you're in the field. If not, you should consider it. If you missed questions, they were probably the random ones about guinea pigs and telomeres--esoteric knowledge, for the most part. The guinea pigs would love you! Keep up the good work! Maybe you're interested in spirituality, too? Sitakaliism Test Paganism Test Spirit Animal Test or politics? The Fruity Commie Pinko Liberal Test